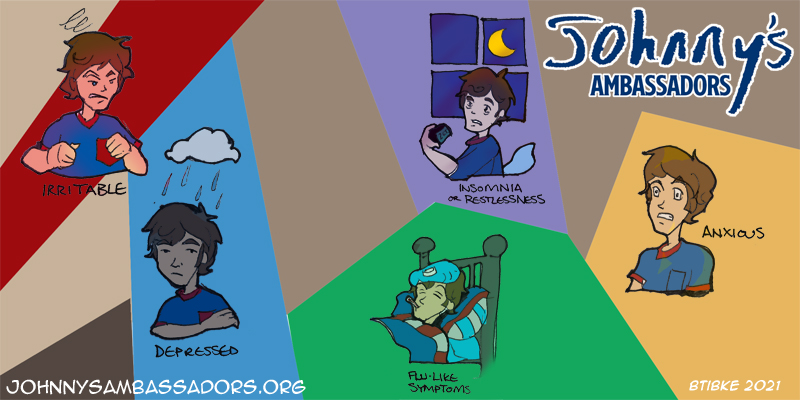 Like all Substance Use Disorders, Cannabis Use Disorder comes with a suite of telltale withdrawal symptoms. Indeed, Cannabis Withdrawal Syndrome (CWS) is a clinical indicator of CUD, and it’s one of the factors that’s convinced most health care professionals marijuana is, in fact, addictive. Generations of users and proponents have insisted it was not. Perhaps this was true for “old fashioned” marijuana, but this argument no longer applies for modern herb with 15-40% THC content and extracts with 90%+ THC content.

Admittedly, CWS does tend to be mild compared to withdrawal syndromes for meth, cocaine, heroin, and other commonly abused drugs—though the sufferer won’t not feel that way while suffering through it. However, as long as the user completely abstains, within two days, the negative effects start to reverse, and CWS can subside within a month. If they tough out the worst effects, users can walk away from marijuana for good if they choose. However, there may have been some irreparable damage with long-term repercussions, as we’ll discuss.

Unfortunately, when CWS starts to manifest, a user may decide to treat it with marijuana. After all, it does make them feel better (this is what happens in addiction). This can result in a repetitive, vicious cycle, which is why if you’re concerned your child is abusing marijuana, you should know the withdrawal symptoms.

CWS, with a Caveat

Anyone who’s ever lived with a teenager knows how moody they can be, and unfortunately some of those moods coincide with some of the symptoms of CWS, so take care when “diagnosing” your child. Don’t focus on behavioral or mood issues alone. Cannabis withdrawal symptoms include:

While users can overcome CUD and CWS and most physical effects caused by marijuana improve with abstinence, marijuana also cause brain structural changes (especially when use starts in adolescence) that may not be reversible. This can include permanently decreased IQ, anxiety and panic attacks; depression; paranoia; psychosis; increased risk of schizophrenia and suicidal thought and behavior.

Many recreational users of marijuana claim they can take it or leave it alone. And they may be right. Research indicates most marijuana users do not become addicted to the point of CUD—although the majority has recently narrowed with concentrates. Until 2020, most research indicated a mere 9% of marijuana users ever developed CUD, with perhaps another 30% being cannabis dependent, though not strictly addicted.

This changed in April 2020, when one set of researchers from Queens University in Ontario conducted a meta-analysis of 47 studies including 23,518 individuals. They concluded prevalence of CWS for those patients after abstinence was 47%—indicating almost half of all former regular and dependent users fulfilled a definitive indicator for CUD. This study, published in the prestigious Journal of the American Medical Association, blows the 9% rate, and even the combined CUD and dependency rate (39%), out of the water.

A similar meta-analysis of 21 studies, published in Addictive Behaviors in October 2020, revealed a 22% chance of users developing CUD on average (rising to 33% for those who started using in adolescence), while 13% presented with cannabis dependence, and 13% suffered from cannabis addiction. While this study did not discuss CWS, when you fold the percentages together (22% + 13% +13% = 48%), the frequency for CUD development is strikingly similar.

Not all observers are convinced by the earlier study, however, arguing that the sample universe was improperly selected, and many of the studies were conducted so differently the ultimate results cannot be generalized to all marijuana users. The author of this Harvard Medical School blog has a point; however, unless I’m missing some methodological point, it seems remarkable that two separate peer-reviewed meta-studies in 2020 (one of which had not been published at the time of his commentary) produced such similar results.

CWS, and cannabis withdrawal symptoms in general, may prove hard to see through the teenage “fog of war” caused by normal parents-aren’t-cool, hormone- and peer-driven behavior. All kids have their bad moods and tummy aches. But the possibility they might result from CUD, a serious disorder, makes them worth looking closely at. In a young person, CUD is an indicator of a lifestyle choice causing lifelong disabilities that not only hurt your teen but can tear your family apart and even take your child by suicide (like Johnny). Unfortunately, cannabis withdrawal symptoms aren’t necessarily a one-time thing, and neither is CUD. They can come and go depending upon availability of supply, the user’s ability to afford marijuana, and most poignantly, when they decide to fight their dependency or addiction to weed.

Teens can prove very smart about drug use—so much so that they only way you may learn about it is through a slip-up (finding it in their room), or something like these withdrawal symptoms. If you observe more than a few of the symptoms in the above list that you can’t otherwise explain, or they seem to occur repeatedly or suddenly, ask your child directly if she/he is using marijuana or dabbing and watch the reaction. If they refuse to let you take them to the doctor or do an in-home THC test, this should arouse your suspicion. Until the age of 18, you have a right to have your children tested for drugs if you take them in for a medical exam. If you’re 100% wrong and they are clean, it’s better to risk their annoyance then permanent long-term disability. You can always apologize and take them on a shopping spree or Chik-fil-A for good behavior.