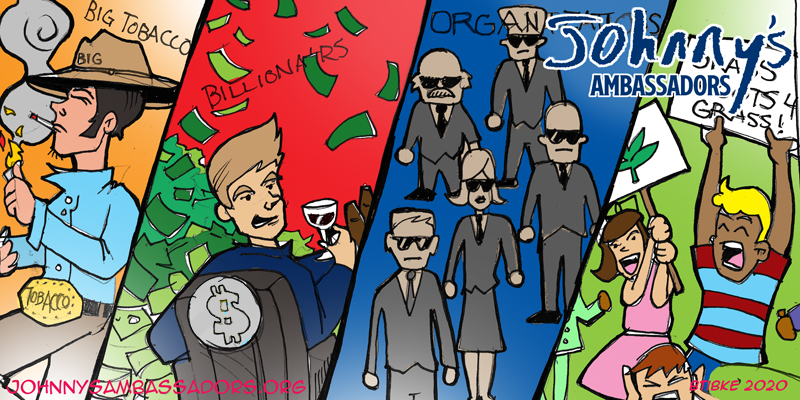 Once upon a time, Big Tobacco used all kinds of misdirection, outright lies, and ads targeting young people to hook its target audience. Tobacco executives claimed tobacco wasn’t addictive well until the mid-1990s, and for a while even pretended it was good for you. For decades, they denied tobacco use caused cancer, emphysema, and other ailments, despite knowing otherwise, until the scientific evidence became so weighty it forced the industry’s collective mouth shut.

Big Marijuana has employed many of the same tactics, arguments, claims, and excuses. It also contributes large sums of money to legalization initiatives wherever it can. By the time “Potzilla” began to get its act together, medical science had already recognized cannabis addiction, as well as its associated Substance Use Disorder (SUD). So, the actors within nascent Big Marijuana knew they were spreading a poison that ensnared misinformed and uninformed consumers, including children.

As a result, from the very beginning, marijuana proponents have been forced to lobby heavily and spread around a great deal of money to convince politicians—sometimes via pressure from the public, sometimes directly—to legalize marijuana in various states and territories. It always seems to start with “medical” marijuana to get a foot in the door, then escalates to legalizing marijuana for recreational use. Johnny was able to get a “medical” marijuana card when we turned 18, and he had NO physical problems, chronic conditions, or debilitating issues. As of March 2021, recreational marijuana is legal in 15 states.

Unfortunately, Potzilla hasn’t been alone in its efforts to legalize marijuana. If it were, marijuana would likely still be illegal everywhere in the U.S. But other sources, some with very deep pockets, have poured money into the effort, or otherwise helped make it happen. Let’s look at the worst culprits.

Big Tobacco, Big Pharma, and Big Alcohol used to fund anti-pot research and initiatives, but most companies in both categories have decided the best way to handle the burgeoning Big Marijuana movement is to join it. While some observers have described painkiller makers as “terrified” of legal pot, leading them to fighting legalization, more recently Big Pharma has decided to take control of the medical action. There’s still some worry, though; one pro-cannabis site claims the large pharmaceutical companies will lose up to $4 billion a year if marijuana becomes legal in all 50 states.

Phillip Morris and other tobacco companies were already making plans to build Big Marijuana back in the 1970s, and Big Tobacco continues to move forward in its takeover. They certainly have the money and know-how to do so. Just one example: Atria, one of the largest tobacco companies on Earth, spent $1.8 billion to buy a multinational marijuana business in 2018, staking its claim in the legal pot arena. Like the other tobacco companies interested in Potzilla profits, they quickly began lobbying for cannabis-friendly laws in Congress and state legislatures.

Ballot initiatives have become big business, attracting the attention of the super-wealthy in recent years. In 2017, National Families in Action identified three billionaires active in marijuana legalization, based on research into marijuana-related ballot initiatives between 1996 and 2016:

These gentlemen contributed far more cash to the legalization initiatives than any other organization or group combined. Often (but not always) their contributions completely swamped the funds spent by opponents.

There are plenty of marijuana legalization organizations out there, but few have any serious political or financial power. The exceptions are organizations like the Marijuana Policy Project (MPP) or the Drug Policy Alliance (DPA), run by the uber-rich. But there are a few others with significant power who fight for cannabis rights, including the American Civil Liberties Union, Doctors for Cannabis Regulation, and the National Organization for the Reform of Marijuana Laws (NORML). The latter is perhaps the most powerful independent organization seeking marijuana legalization.

Based in Washington, DC, NORML has been active since 1970 and has helped push through myriad ballot initiatives. It employs hundreds of lawyers to do its work in the U.S. alone and contributes financially to many of the ballot initiatives as well. The amounts it donates vary from the low thousands to nearly $148,000 (in the case of 2016’s successful Question 4 initiative in Massachusetts). So NORML is a major player here, though it can’t compete with the tens of millions contributed by the billionaires.

Regular marijuana users comprise about 8.3% of the population, so users alone aren’t financing or backing marijuana legalization. If they were, it would be a dead issue. In the case of most state ballot initiatives, people who lived in the relevant state contributed only a small percent of the money used to fund the initiatives. Nonresidents and the other sources cited discussed here contributed the rest.

Let’s face it: when you get right down to it, the biggest backers of marijuana legalization are everyday Americans. We may not vote with our pocketbooks the way the pro-pot organizations or the wealthy do, but we do vote. And generally, we vote in favor of pot. After all, without widespread public support, extraordinary laws like these couldn’t get passed.

According to the Pew Research Center, by the end of 2019, two-thirds of Americans supported marijuana legalization. The breakdown was quite uniform by gender, race, and education, ranging from 63-69%. A greatest disparity was observed between Republicans and Democrats, with approval ratings of 55% and 78%, respectively. Generation-wise, Baby Boomers, Gen-Xers, and Millennials heavily supported marijuana legalization. The support of older Americans barely reached 35%.

Collective opinions like this result from the culture in which the cohorts grow up and live—sadly, most people aren’t well-educated about the risks of marijuana use. They tend to place greater belief in pop culture sources, movies, and media, which downplay the dangers of marijuana, than in the scientific or medical evidence that doesn’t get as much airplay.

Ultimately, I suspect most people aren’t interested in using marijuana themselves—but they want the right to do so. Influencers take advantage of this ambivalence by injecting money into campaigns for marijuana as a safe, effective medical and recreational drug with fewer side effects than tobacco, taking advantage of decades of misinformation. In short, public opinion has made it much easier to legalize marijuana. While the general public contributes very little to legalization initiatives—rarely more than a few thousand dollars each—it’s still arguably to blame for every instance of pot legalization in America.

We may not like pot, but we don’t dislike it enough to keep it illegal.